CAS demonstrates how achieving repeatable innovation in any field requires a structured approach through machine learning and advanced analytics. This structural innovation framework provides an opportunity for teams to assess candidate portfolios from a macro and micro level.

Innovation in the biopharmaceutical industry is a closely monitored driver of positive public health and commercial outcomes. Despite high interest in tracking innovation as a measure of success, there is little agreement on how to effectively measure it. Like many things in life, any assessment of innovation in pharma depends on the perspective from which you evaluate it. The primary metrics cited for drug innovation by analysts are the number of newly approved drugs, or sometimes the number of drug candidates entering various phases of the development pipeline. These count-based measures, along with other non-count outcome-based metrics, such as first-in-class and breakthrough therapy designations, are informative and highlight important advancements. They also have the benefit of being fairly easy to track and compare. However, they fail to capture the inherent innovativeness of new molecular entities (NMEs) from a chemist’s perspective.

In a new paper recently published in ACS Medicinal Chemistry Letters, my colleague Alan Lipkus and I approach this issue from an early-stage synthetic chemistry point of view. The result is a new approach to measure and describe early-stage drug innovation based on a structural analysis of the NMEs. This approach, when considered alongside existing outcome-based measures, contributes to a more complete view of the pharmaceutical innovation landscape.

Is innovation increasing or decreasing overall in pharma? View the complete open-access article to learn more about the methodology and see the full results of our analysis across the past two decades.

Our new approach to characterizing drug innovation based on structural novelty relies on the concept of a molecular framework. The framework of a chemical structure is defined as the substructure consisting of all ring systems and the chain fragments connecting them. Using a classification scheme that takes into account molecular framework information (at the scaffold and shape level) as well as the year a drug is approved, each NME is assigned to one of three classes: Pioneers, Settlers, or Colonists, as shown below. 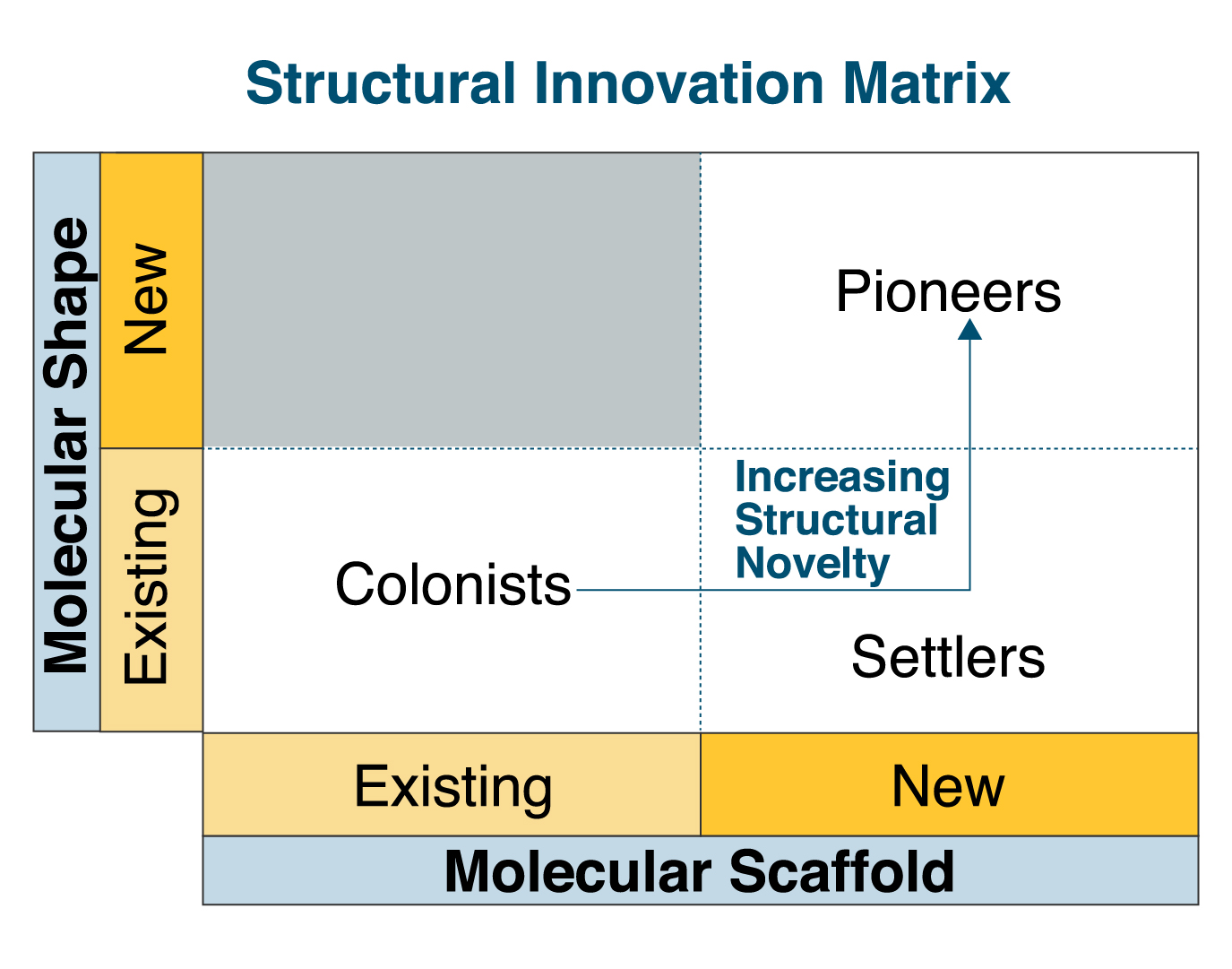 Receiving FDA-approval for a new drug, whether through an incremental advancement or an entirely new structure, is a major accomplishment and the primary success measure of most drug discovery teams. Thus, all three classes in this framework represent some level of innovation. However, for purposes of comparison in this study, Pioneers were deemed the most innovative.

Though there is certainly merit in celebrating innovation for its own sake, to be useful from a strategic point of view any measure of drug innovation must demonstrate some correlation to positive outcomes that align with organizational objectives. Bringing a blockbuster drug to market that addresses an important medical need and delivers significant return on research investments is considered by many to be the pinnacle of drug innovation. By that measure, CAS analysis shows that nearly 65% of current blockbuster drugs contain at least one Pioneer component. Pioneers were also shown to be more than twice as likely as the other classes to achieve blockbuster status (over $1 billion in annual revenue) within 5 years of launch. Furthermore, if we use the U.S. FDA breakthrough therapy designation as a proxy of a drug’s potential impact on public health, our research demonstrates that Pioneers are significantly (over 2.5 times) more likely to be the source of these promising new therapies.

The blockbuster drug Imbruvica (ibrutinib) demonstrates the powerful impact of structural innovation. The first-in-class Bruton's tyrosine kinase (BTK) inhibitor discovered by Celera Genomics and jointly developed and commercialized by Pharmacyclics and Janssen was approved by the U.S. FDA in 2013. Its therapeutic and commercial potential was the primary driver for AbbVie’s acquisition of Pharmacyclics for almost $21 billion in 2015. This structurally novel Pioneer has secured 11 total FDA approvals for different indications to date and is one of only two small-molecule therapies that have received more than three Breakthrough Therapy Designations by the U.S. FDA. Imbruvica (ibrutinib) generated total sales of $7.24 billion across all indications in 2019.

Tracking the sources of structural innovation

To assess the leading sources of pharma innovation, we divided the Pioneers into two groups: those originating in organizations that we define as “Big Pharma” based on drug-related revenue, including AbbVie, AstraZeneca, Bayer, Bristol-Myers Squibb, Eli Lilly, GlaxoSmithKline, Johnson & Johnson, Merck & Co., Novartis, Pfizer, Roche and Sanofi, and those originating in other organizations (Rest of Ecosystem or ROE). Consistent with our focus on early-stage drug discovery innovation, we gave credit to the R&D organization that discovered the NME, rather than the organization that developed it or secured drug approval.

This analysis shows that the aggregate number of Pioneers originating from Big Pharma increased by almost 50% when comparing 2000-2009 to 2010-2019, and a majority of Big Pharma organizations saw an increase in the number of Pioneers, as shown in the chart below. Most notable was Bayer, who did not have any Pioneers approved between 2000 and 2009 but had four approved between 2010 and 2019. AbbVie and Bristol-Myers Squibb also saw an increase of four over this time. 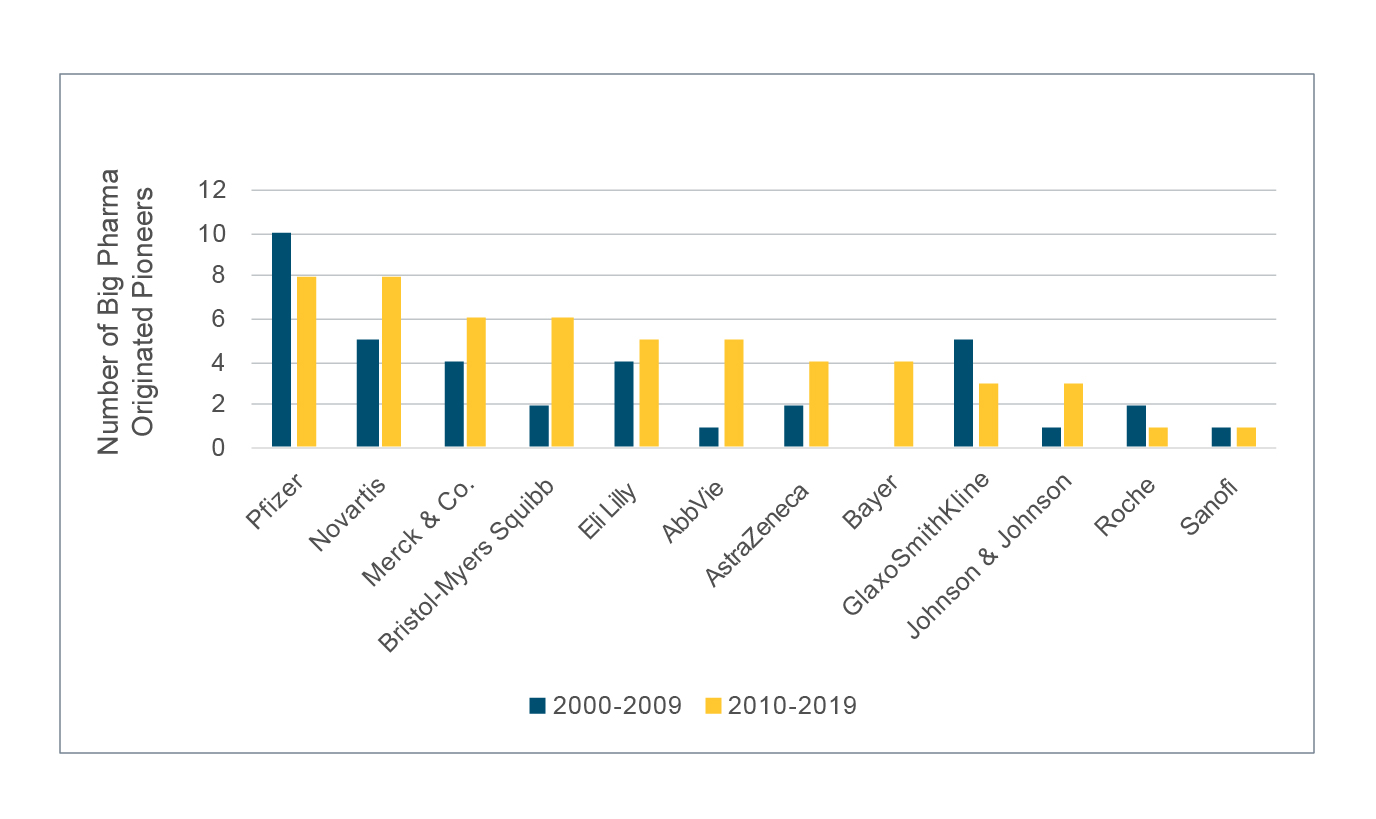 Despite an overall increase in the number of Big Pharma originated Pioneers, this analysis also highlights a widening structural innovation gap between Big Pharma and the ROE, as shown in the chart below. This shift is likely driven by factors including the increasing importance of in-silico methods in the drug discovery process and the wider availability of high-quality compound libraries reducing barriers to entry. 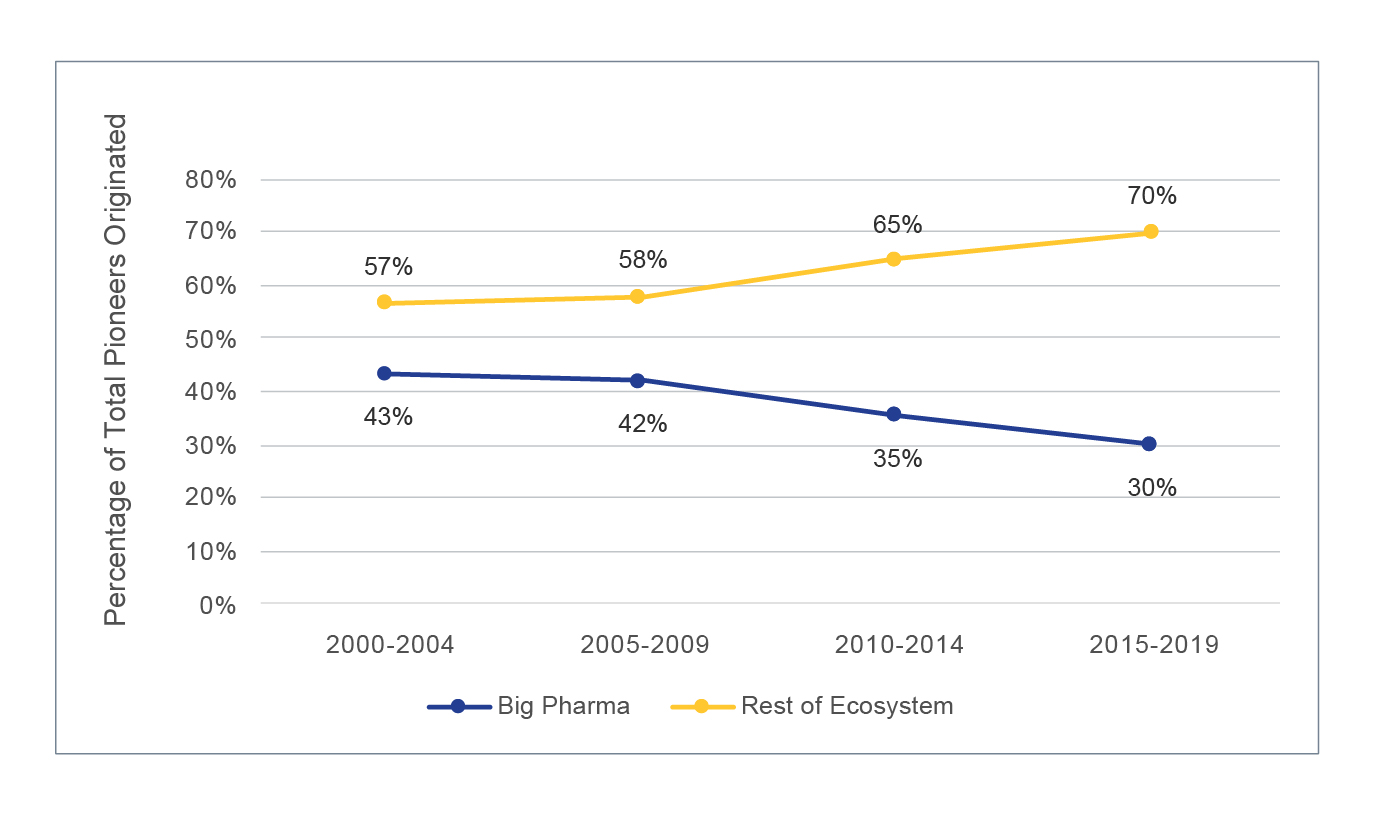 These findings may suggest that when it comes to innovation, scale is no longer as much of an advantage as it once was, and I expect it will continue to become even less so in the future. While the physical scale of an organization’s R&D capacity used to be a primary governor on innovation volume, as brute force discovery gives way to in-silico-augmented approaches, digital assets and capabilities are beginning to level the playing field.

As insights derived from massive datasets through machine learning and advanced analytics continue to accelerate early-stage drug discovery research by helping prioritize drug candidates with the highest likelihood of success, companies that leverage data most effectively to bring better drugs to market in less time will gain a competitive advantage. This efficiency increase also presents the opportunity to enhance innovation by more fully exploring new areas of chemical space and considering a wider range of potential candidates in the hunt for effective therapies. Though it matters little whether the final therapy that cures the disease is a Pioneer, Colonist, or Settler, intentionally structuring a diverse portfolio of candidates is on average likely to drive a higher success rate over time.

To take advantage of this opportunity, research teams may need help to overcome an ingrained tendency to bypass more ambitious forms of structural innovation and natural human risk adversity to achieve a diverse innovation pipeline. It has been demonstrated many times that achieving repeatable innovation in any field requires a structured approach. This structural innovation framework provides an opportunity for teams to assess candidate portfolios from a macro and micro level. From a macro level, how many are being pursued in each category, and how much investment is going to each type of structural innovation? From a micro level, are compound libraries and training data sets sufficiently diverse to produce a broad range of hits for further investigation? The pursuit of opportunities identified as a result of asking these questions has the potential to take efficiency gains driven by new technologies and translate them not just into increased profits but also into better patient outcomes.

Could your R&D effort benefit from an assessment of your innovation opportunities from a structural perspective and what data might help you be more innovative? Contact the CAS Services team to discuss the unique insights that a custom analysis could provide.

Meet the mRNA vaccine rookies aiming to take down COVID-19