Graphene has been touted as a miracle material, a superhero of modern chemistry. The excitement over graphene results from its unique properties. Only one atom thick and more than 200 times stronger than steel, graphene is light, flexible and efficiently conducts both heat and electricity. It also creates a perfect impermeable barrier that not even helium atoms can pass through.

This property profile makes graphene-based materials very interesting for a wide variety of high-demand applications, including composite materials, wearable electronics, sensors, semiconductors and even medical devices. Graphene also has the highest surface area to volume ratio of any known material, making it valuable for applications such as batteries and solar cells, where size and weight are key limiting factors.

Since its initial isolation in 2004, researchers have been in a global race to realize this great potential by developing the first commercial applications of graphene. Data from the last two decades highlights intriguing patterns of innovation within the field, as outlined in a previous white paper jointly published by CAS and the National Science Library, Chinese Academy of Sciences. Here we provide an updated overview of the landscape from a research and business perspective.

How has the graphene research landscape evolved? 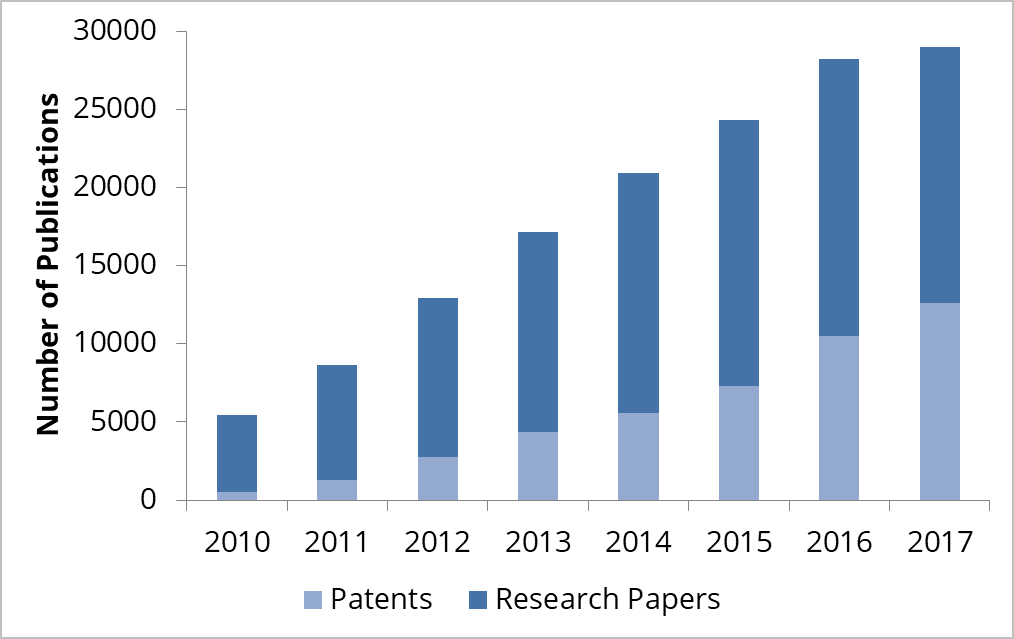 By examining the number of graphene-related research publications since 2010, several trends emerge. First, output in general has dramatically increased. Research output has grown 5 fold over this period, showing a global explosion of interest that fully reflects the intense race for graphene commercialization.

More detailed trends can be found when the output is subdivided by nation. The majority of published research comes from just five countries: China, United States, South Korea, Japan and India. Isolating data from these individual countries highlights the evolution of leadership in the field. For example, the United States and Japan emerged as the early leaders doing basic research prior to 2010, and then their productivity remained approximately constant thereafter.

However, the entry of Korea and China into the research landscape around that time drove rapid growth that continues even still. At this point, China dominates the graphene IP landscape, accounting for over 60% of the overall patent filings since 2010. This burst of production is especially impressive for a country that joined the graphene race later than its counterparts.

India's increased output is also impressive. Within the space of five years from market entry, India managed to surpass Japan’s total number of graphene-related papers. This trend may indicate future leadership, and reflects an overarching trend of emerging markets rising to compete for innovation with the more established countries in specialized fields.

Who is winning the graphene race?

If measuring progress by sheer research productivity, China currently dominates the global graphene landscape. However, by examining the underlying trends, we discover important context. Most of China’s patents are university owned and have only ever been filed in China. In contrast, graphene-related patent applications from other countries, such as Germany, United States, Korea and Japan, though fewer in number, are routinely extended into other key global markets, setting them up for more likely success in commercializing their innovations.

Although research is plentiful and expectations are high, a number of roadblocks hamper innovators from fully realizing the promise of this material. The primary challenge is development of cost-effective, large-scale production methods that meet the quality requirements of key applications. The focus on this challenge is evidenced by a growth in patent activity related to graphene preparation and process over the last few years. Graphene also faces competition from other emerging carbon technologies, such as nanotubes and graphite, which may prove more commercially viable for widespread application.

Overall, graphene remains of high interest to researchers and strategists across a wide range of industries. However, the shine of the initial promise has been dimmed somewhat by commercialization challenges. Careful monitoring of the landscape related to preparation and production methods for graphene is warranted, as a significant breakthrough is likely to drive a fresh surge in intellectual property and applications that could be disruptive across a wide range of segments.

Need to more closely monitor developments in graphene or other emerging technology areas important to your work? Learn how CAS can help.

Meet the mRNA vaccine rookies aiming to take down COVID-19

Our evolution is a job that is never done