What are molecular glues?

Molecular glues are small chemical entities that use a ground-breaking strategy known as proximity-induced target protein degradation (TPD) in which pathogenic proteins of interest (POIs) are linked to natural digestive enzymes and are destroyed (Figure 1). This approach effectively ‘sticks’ or links POIs to E3 ubiquitin ligases of the ubiquitin-proteasome system, which normally functions as a cellular trash processing system. This approach has created new classes of therapeutic agents with entirely novel modes with exciting potential activity against various serious diseases such as cancer, inflammatory and immune diseases, and infections, many of which are driven by the aberrant expression of a pathogenic protein. There are more than 600 E3 ubiquitin ligases encoded in the human genome, and so far, only a few have been exploited using the TPD approach, so there is considerable potential to develop many more.

Protein degraders are advantageous because they act via transient binding rather than competitive occupancy and dissociate after promoting polyubiquitination of the POI. A single degrader can therefore destroy many copies of a pathogenic protein providing high efficiency against previously ‘undruggable’ proteins at low doses. Protein inhibitor drugs block the active site of a pathogenic protein, whereas degraders remove all of its functions, providing higher sensitivity to POIs, and a better chance to affect the non-enzymatic protein interactions.

The development of TPD compounds that use ubiquitin-driven natural protein degradation for therapeutic purposes has advanced considerably over the past two decades. The first patent of a therapeutic chimeric degrader to link a POI to E3 ligase was filed by Proteinix in1999. This was followed by a proof-of-concept study in which a cancer-associated protein was successfully degraded by a proteolysis-targeting chimera (PROTAC). The early PROTACs were large-molecular structures; the first report of a small molecule androgen receptor (AR) degrader using nutlin-3 for recruiting of MDM2 was published in 2008. The subsequent discovery of small-molecule mimetics of the HIF1α peptide expedited the rational design of small molecular PROTACs. So far, few proximity-induced TPDs have reached clinical testing, but two PROTACs (ARV-110 and ARV-471, which target the androgen and estrogen receptor, have progressed to Phase II trials, and many others are now in development.

Molecular glues and PROTACs have different properties. Molecular glues are small molecules that interact with a variety of target proteins that are difficult to predict, exhibiting distinct biological activities by inducing and enhancing the interaction of two proteins that otherwise do not show an intrinsic affinity for each other. PROTACs are bivalent molecules consisting of two moieties, one binding to the POI and the other to E3 ligase, joined by a linker. Molecular glues are smaller and are expected to have better pharmacological properties, higher membrane permeability, better cellular uptake, and better penetration of the blood-brain barrier than PROTACs. Molecular glue identification has relied primarily on serendipity, but rational design approaches to targeting undruggable proteins are emerging. Following the initial discovery, the pathway proceeds to scaffold definition, optimization, and validation (Table 1).

Molecular glues of varying types have been discovered; the best known is probably thalidomide and its analogs, and lenalidomide and pomalidomide, which target the E3 ligase cereblon. Molecular glues have been identified with various other mechanisms of action, including autophagy-mediated protein degradation, MEK sub-complexes stabilization, KRAS mutant inhibition, α-tubulin polymerization stabilization, and FK506-binding protein 12 (FKBP12) degradation.

The CAS Content Collection™ is the largest human-curated collection of published scientific knowledge, suitable for quantitative analysis of global scientific publications against variables such as time, research area, formulation, application, and chemical composition. To assess recent advances in molecular glue research, particularly in medicinal chemistry and drug discovery, a new white paper has examined the relevant publication data during 2012 to 2021 from the CAS Content Collection. During this period, there was an explosive growth in published articles and patents related to protein degraders (Figure 2).

Journal publications on protein degraders were mostly from the United States, China, United Kingdom, Japan, Germany, and others (Table 2A). The Dana-Farber Cancer Institute and the University of Dundee published the largest number of TPD-related journal articles (Table 2B). The largest numbers of protein degrader-related patent filings were from China and United States (Table 2C). The journals that frequently publish TPD-related articles are presented in Table 2D, highlighting the importance of TPD in medical research; the Journal of Medicinal Chemistry and the European Journal of Medicinal Chemistry have the greatest number of TPD-related articles. 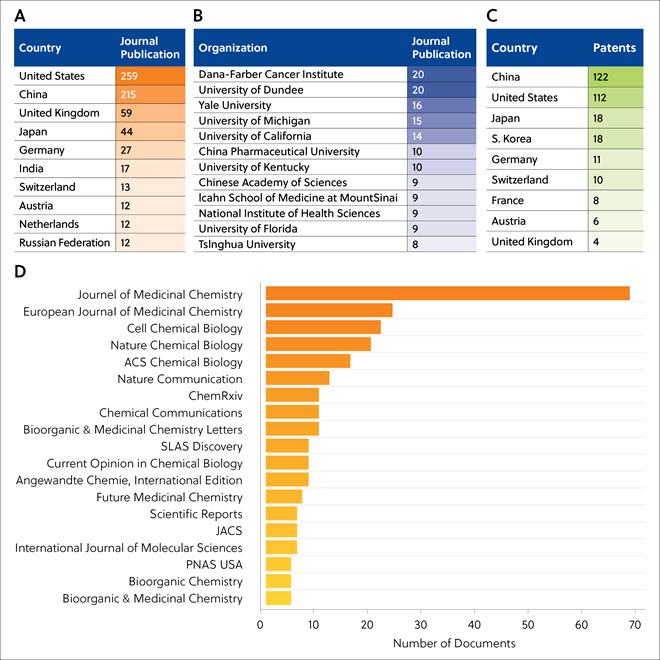 The most frequent type of TPD in publications were small molecules (85.8%), followed by biosequences (7.7%), including peptides, proteins, nucleic acids, and salts (Figure 3 left panel). This indicates a change from the early protein-targeting chimeric molecules, which were peptide-based. Protein degraders are synthesized via multistep chemical reactions, which explains the dominance of the synthesis-related roles of SPN (synthetic preparation) and RCT (reactant) in the literature analysis results (Figure 3, right panel). Significantly greater numbers of compounds indexed in the CAS Content Collection originated from patents.

In the literature analysis, CRBN, VHL, and MDM2 were found to be the most popular types of E3 ligases being used to recruit TPDs to induce ubiquitination and subsequent proteasomal degradation of target proteins in cancer, inflammation, neurodegenerative, autoimmune, and infectious diseases (Table 3).

The largest number of publications during 2017-2021 were on PROTACs and E3 ubiquitin ligases, followed by cereblon, proteasome, and ubiquitination (Figure 4A). Documents on molecular glues and protein degraders were less numerous but showed explosive growth and interest from 2019 onwards. Other concepts, including ubiquitination, E3 ligase, cereblon, PROTAC, and proteasome, also showed continuing strong growth throughout 2017-2021 (Figure 4B).

An analysis of the diseases targeted by protein degraders found in the CAS Content Collection showed the largest portion (44%) of the publications were associated with varied cancers (e.g., breast and prostate cancer, multiple myeloma, and leukemia). In addition, infectious (11%), neurodegenerative (10%), inflammatory (10%), autoimmune (8%), metabolic (6%), and cardiovascular (5%) diseases were also highly represented (Figure 5).

Molecular glues - discovered and in development

The number of known molecular glue types and structures is already considerable and is growing. The most extensively investigated molecular glues are small molecules that bind the E3 ligase CRBN and the aryl sulfonamides that engage DCAF15. Other molecular glues that induce protein degradation through various non-E3 ligase mechanisms of action include autophagy-mediated protein degradation, protein-protein interaction stabilization, KRAS mutant inhibition, microtubule polymerization stabilization, and inhibition of the mammalian target of rapamycin (mTOR). In addition, there are natural compounds such as cyclosporin A and sanglifehrin A, which have been found to function as molecular glues. These developments indicate an important broadening of molecular glue approaches and a potentially more diverse range of action.

While many potential molecular glues have been identified, so far, very few have been assessed for therapeutic efficacy in the clinic, and even fewer have received regulatory approval. Various companies worldwide have a series of molecular glue products in pre-clinical development for use in a variety of cancers, and neurodegenerative and inflammatory diseases. A snapshot of these companies include:

Several other companies/institutions have a promising range of molecular glue compounds in various stages of clinical development that aim to treat many different solid and liquid tumors along with inflammatory conditions and autoimmune diseases such as systemic lupus erythematosus (Figure 6).

Prospects for molecular glues as therapeutic agents – can they address unmet medical needs?

Inducing the proximity of target proteins to degradative enzymes that would not otherwise come into close contact using molecular glues is an exciting approach with the potential to create large numbers of highly novel therapeutic agents against a wide range of serious diseases. The challenge is to now develop the TPD approach by identifying candidate compounds with useful activities and progressing them to clinically useful products.

The mechanism of action of molecular glues and their design principles are insufficiently understood and further research is needed to create new compounds and exploit them fully. The methods of novel molecular glue discovery have largely relied on intensive high-throughput screening, followed by systematic validation. There is a need for efficient and rational design strategies to enhance the development of new and more efficient compounds and to assess their activity in varying indications. Computational tools to model and predict molecular glue binding and advances in crystallization to improve understanding of protein docking are needed to transition from serendipity to rational design.

The CAS Content Collection searches show that inducing protein degradation using molecular glues is attracting widespread interest and explosive growth both in terms of research articles and patents. While E3 ligase-targeting compounds continue to predominate, there is also strong interest in non-E3 ligase compounds and some natural molecular glue degraders, which indicates a large diversity of potential agents. The outlook for molecular glues, therefore, appears to be promising with the likely appearance of many more therapeutic agents using this approach in the near future, which have the intriguing potential to address a diverse range of medically unmet needs.

Download our white paper to discover the explosive growth of molecular glue degraders, their therapeutic applications, and how the research interest has evolved over the last decade.

A therapeutic revolution: RNA in COVID-19 and beyond