Leveraging the biologics boom for your drug development pipeline

Biologics (also known as biopharmaceuticals) have been celebrated as the most promising category of new drugs in the 21st century. Predicted to revolutionize healthcare, biologics are products that are primarily manufactured with recombinant DNA technology or isolated from biological sources. With their robust pharmacological activity, low toxicity and high target specificity, they have generated an explosion of interest across many fields including cancer, immune disease, inflammation and endocrinology.

This intense and growing interest, coupled with major recent breakthroughs in biotechnology, has encouraged major pharmaceutical companies to invest heavily in the development of new biologics. A recent report by EvaluatePharma, a U.S. market research institute, drives home this point. It predicts that biologics will make up 8 of the top 10 global best-selling drugs in 2018 and that the global biologics market will grow to $399.5 billion in 2025, further highlighting the commercial opportunities in this area.

According to Cynthia Liu, Manager of Scientific Information at CAS and contributing author on this blog post, as development in this sector is promising and evolving rapidly, the challenge is staying abreast of the landscape to allocate investment, resources and time accordingly. To help shed light on emerging trends, we worked with Caroline Ma, Manager of ACS International in China, on a collaborative analytical whitepaper published by CAS and the National Science Library, Chinese Academy of Sciences (NSLC). Here, we use the results of this analysis to describe the landscape in the four biggest classes of biologics: therapeutic antibodies, gene and cell therapy, vaccines and therapeutic fusion proteins.

What are the global market trends in biologics?

If we look at the global biologics market as a whole, we can see that it has dramatically expanded over the past three decades. Underlining this point, the number of biologics registered by CAS has increased over 300-fold (see the graph below) and research output has grown steadily, with an ever-increasing number of published journal articles and patent applications. The number of biologics that pharmaceutical/biotech companies have requested CAS Registration Number identifiers and Index Names has also more than doubled during the last five years compared to the previous five-year period. 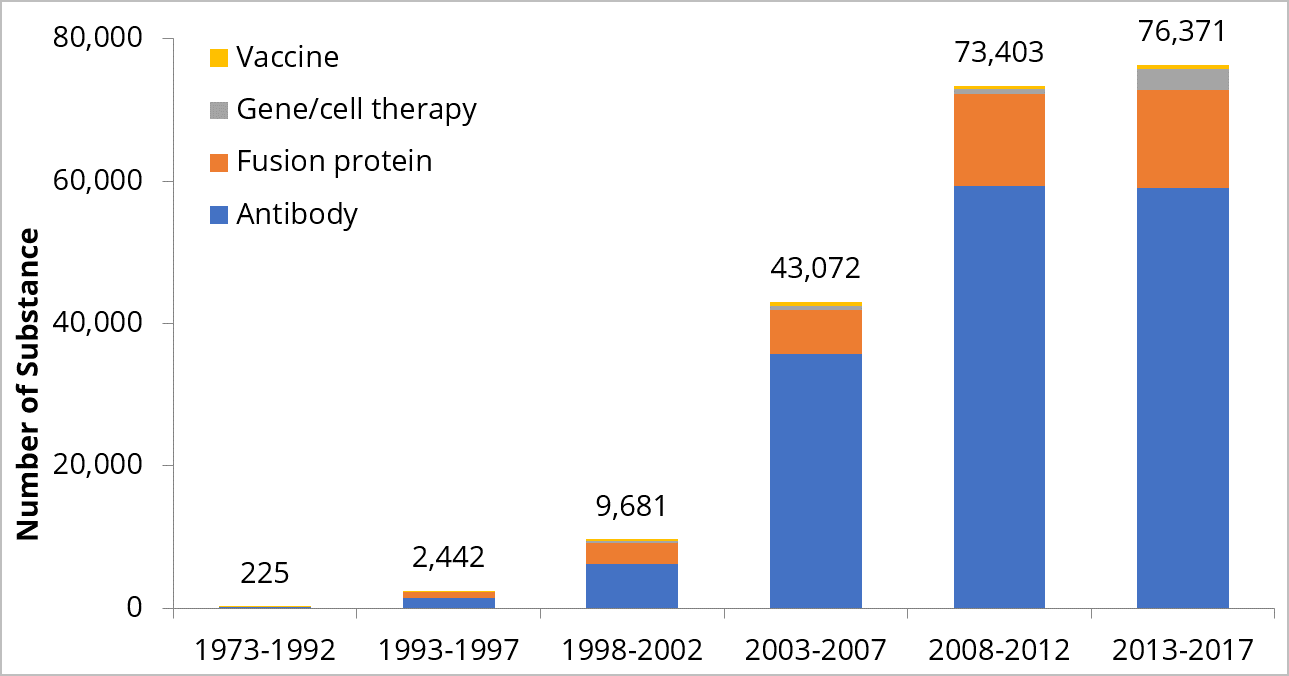 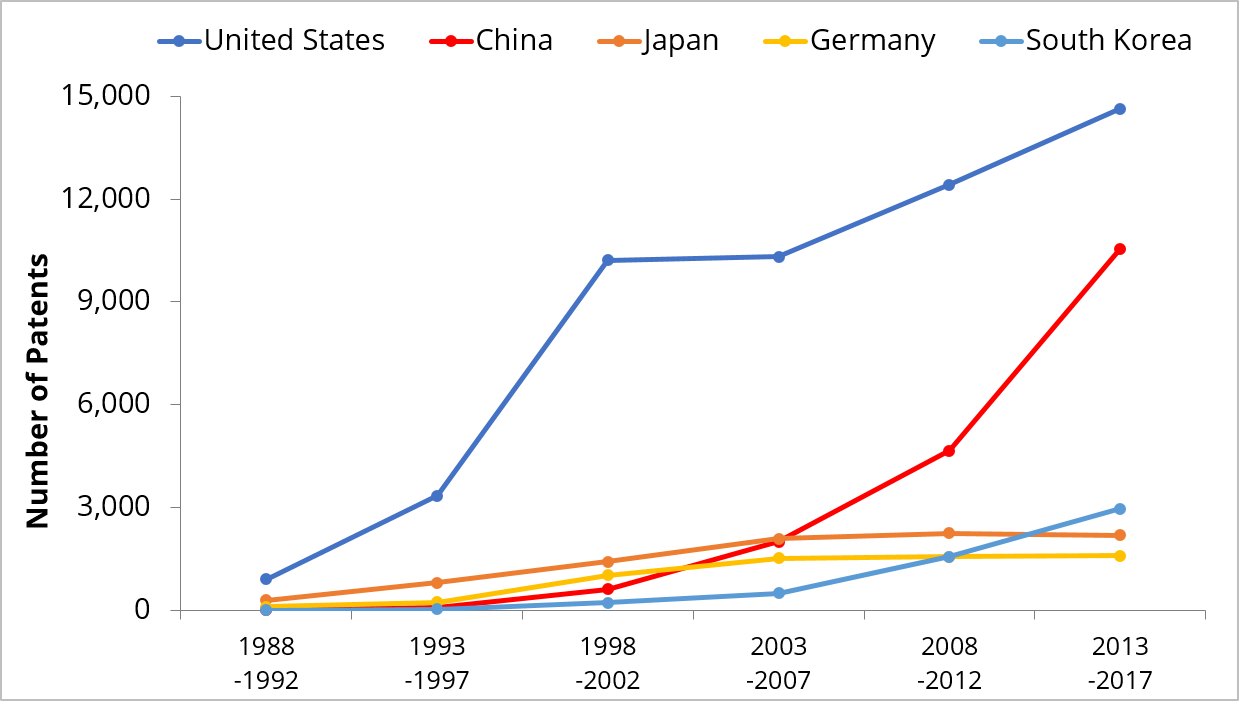 Patterns in patent flow between the major players are shown in the graphic below. In general, the U.S., Japan and Germany are in an overall state of technological export, whereas China and South Korea are in a state of import. As the major player in the biologics market, the U.S. shows a particularly interesting pattern of patent flow. Over the past three decades, the U.S. exported more than 11,742 patents to Japan, 6,355 to China, 4,660 to South Korea and just 72 to Germany. Such discrepancies in patent flow between countries shows how important it is to explore the data in some detail to understand the complex patterns of innovation, research and development in this market. 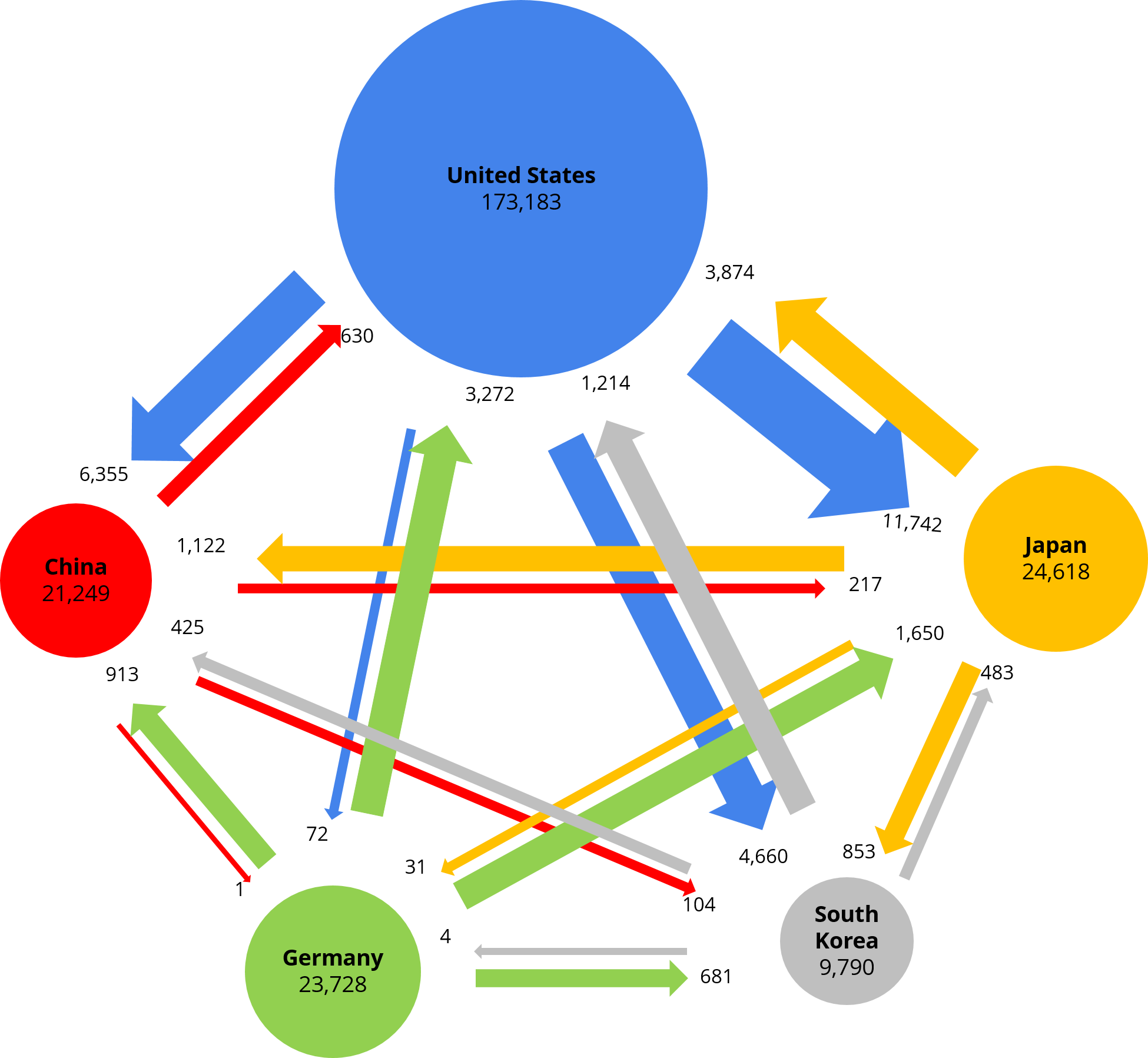 Insights into the global market can be extremely valuable for academics, corporations and investors alike. Analyzing the patterns of market growth across the globe can help identify potential collaborators, discover and exploit underserved research areas, and make more informed decisions about where to invest your time, resources, funds and energy.

Which biologics market areas are attracting the most investment activity?

With the scope of biologics continually broadening, looking at the differential growth of market sectors can help identify novel opportunities for investment. For example, as the sector has matured, the focus has diversified from antibodies and preventative vaccines to include recombinant protein drugs, tumor vaccines, gene therapy and cell therapy (e.g., stem cells).

Our analysis provides insight into which areas are receiving the most investment, which are growing the fastest and so on. Interestingly, even though the focus of research has widened, the biggest therapeutic class is still antibodies. Of these, the most studied is rituximab, a monoclonal antibody used to treat non-Hodgkin lymphoma and chronic lymphocytic leukemia. Meanwhile, neoplasia is the most widely studied disease class and breast cancer the most studied disease in this field. Exploring the literature in even more detail has the potential to reveal interesting relationships between many substances and diseases, as well as new potential drug applications (see the substance-disease relationship heat map in the full whitepaper).

Predicting the future of biologics

The recent explosive growth of the biologics sector looks set to continue and their therapeutic use is increasingly being recognized as a fourth major method in cancer therapy (alongside the well-established approaches of surgery, chemotherapy and radiotherapy). With their suitability for individualized treatment, biologics will also play a key role in the development of precision medicine, another major area of focus for researchers, healthcare providers, investors and pharmaceutical companies.

To predict and fully leverage the potential of biologics, it is important to understand the intricacies of this complex market. Download the whitepaper produced by CAS and the NSLC for a comprehensive market overview covering the top four classes of biologics.

Need to more closely monitor developments in biologics or other areas important to your work? Learn how CAS can help.

A therapeutic revolution: RNA in COVID-19 and beyond