The evolving exosome: from small player to rising star

Dubbed ‘nature’s lipid nanoparticles’, exosomes are a subset of extracellular vesicles released from cells as part of their normal physiology or under certain pathologies. They are gaining the attention of the scientific community due to their ability to carry messages between cells in the form of proteins, nucleic acids, and other biomolecules. Their promise in therapeutics and diagnostics is garnering interest from both corporate and academic institutions. To predict and fully leverage the potential of the exosome, it is important to understand the depth and breadth of the research landscape.

In this three-part series, we explore the history of exosomes, before describing the latest exosomal research in drug delivery and diagnostics. Using insights from the CAS Content Collection™, we provide a landscape view of recent research advancement on exosome applications, while highlighting the opportunities and challenges in this rapidly expanding area.

The evolution of exosome applications

It was over 50 years ago that researchers first observed minute particulates in human plasma. They found that this material — which they termed “platelet dust” — was lipid-rich and likely to be involved in platelet activation. Yet it was not until the 1980s that these 30–150nm extracellular vesicles were first defined and the name ‘exosomes’ was coined.

Like liposomes, exosomes are comprised of a lipid membrane and an inner aqueous medium. However, exosomes were found to be more complex in structure, containing a large array of proteins and lipids. Produced in the endosomal compartment of most eukaryotic cells, exosomes are subsequently released into the extracellular space by fusion with the plasma membrane. Upon release from the secreting cell, they transmit messages to recipient cells through several mechanisms, including surface receptor interaction, membrane fusion, as well as receptor-mediated endocytosis, phagocytosis, and/or micropinocytosis (Figure 1). 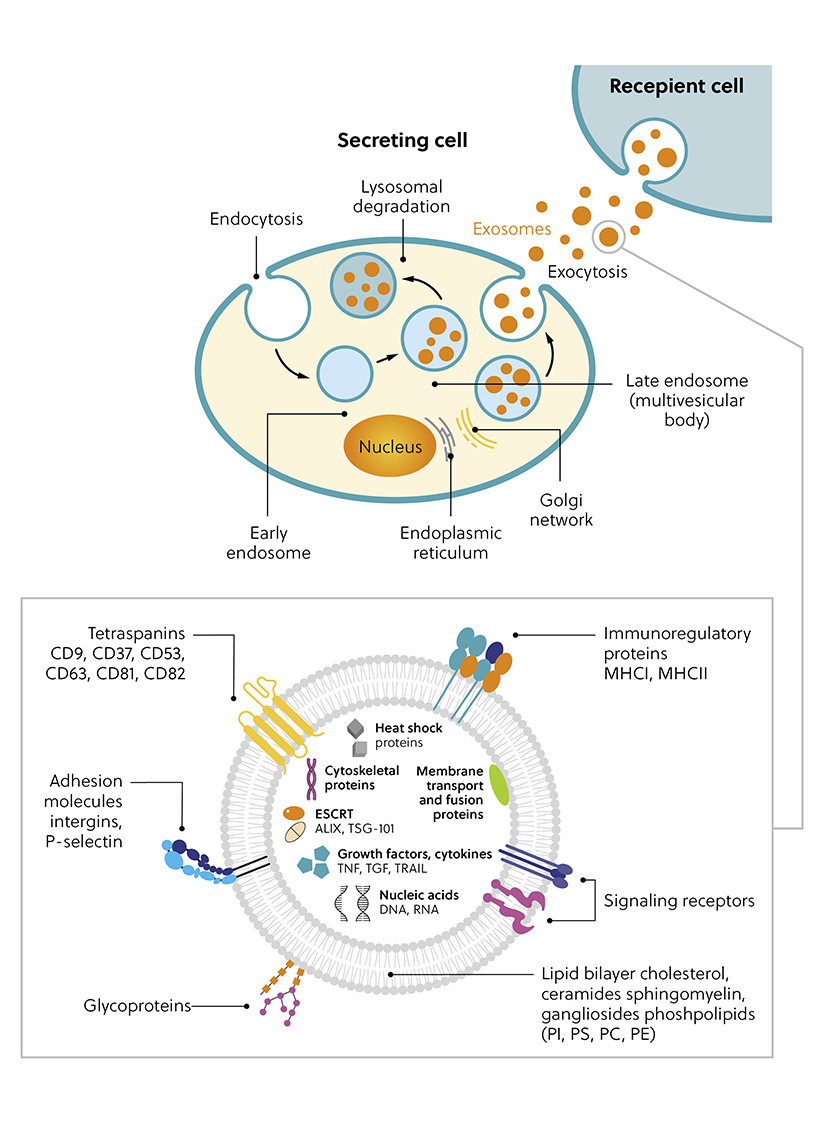 Figure 1. Schematic representation of exosome biogenesis and secretion. The inset shows the molecular constituents of the exosomes.

Since their initial characterization, further studies have revealed that exosomes are secreted by most viable cell types, including immune cells, intestinal epithelial cells, and neurons. Exosomes are also present in a variety of biological fluids such as blood, urine, saliva, breast milk, amniotic, synovial, cerebrospinal fluids, and even tears.

The exosomal pathway of intercellular traffic plays a significant role in many features of health and disease, including immunity, tissue homeostasis, and regeneration. Exosomes permit efficient intercellular communication and signaling between cells and across biological barriers (including the blood-brain barrier). Exosomes are effective cellular transport systems, capable of shuttling bioactive ‘cargo’ such as proteins, lipids, and nucleic acids. Though exosomes are involved in important physiological activities, they also play a significant role in the pathogenesis of diseases including cancer, cardiovascular and neurodegenerative diseases, and viral infections.

To understand how these small particles can induce such large-scale effects, let’s consider their unique properties. Firstly, they are innately stable due to their lipid bilayer membrane, allowing them to circulate even in the harsh tumor microenvironment. Their lipid bilayer also minimizes immunogenicity and toxicity, supporting their stabilization into the extracellular space. Due to their endogenous origins, exosomes also exhibit high biocompatibility. Finally, exosomes have an excellent tissue/cell penetration capacity. Owing to these properties, exosomes have the potential to overcome several of the limitations associated with other drug delivery systems. Indeed, researchers are beginning to recognize the advantages exosomes hold over other drug carrier systems.

An analysis of the CAS Content Collection™ — the largest human-curated collection of published scientiﬁc knowledge — has uncovered fascinating insights into the publication trends for exosomes. Currently, there are over 40,000 scientific publications (journal articles and patents) in the CAS Content Collection related to exosomes/extracellular vesicles with a steady, exponential growth over time (Figure 2). 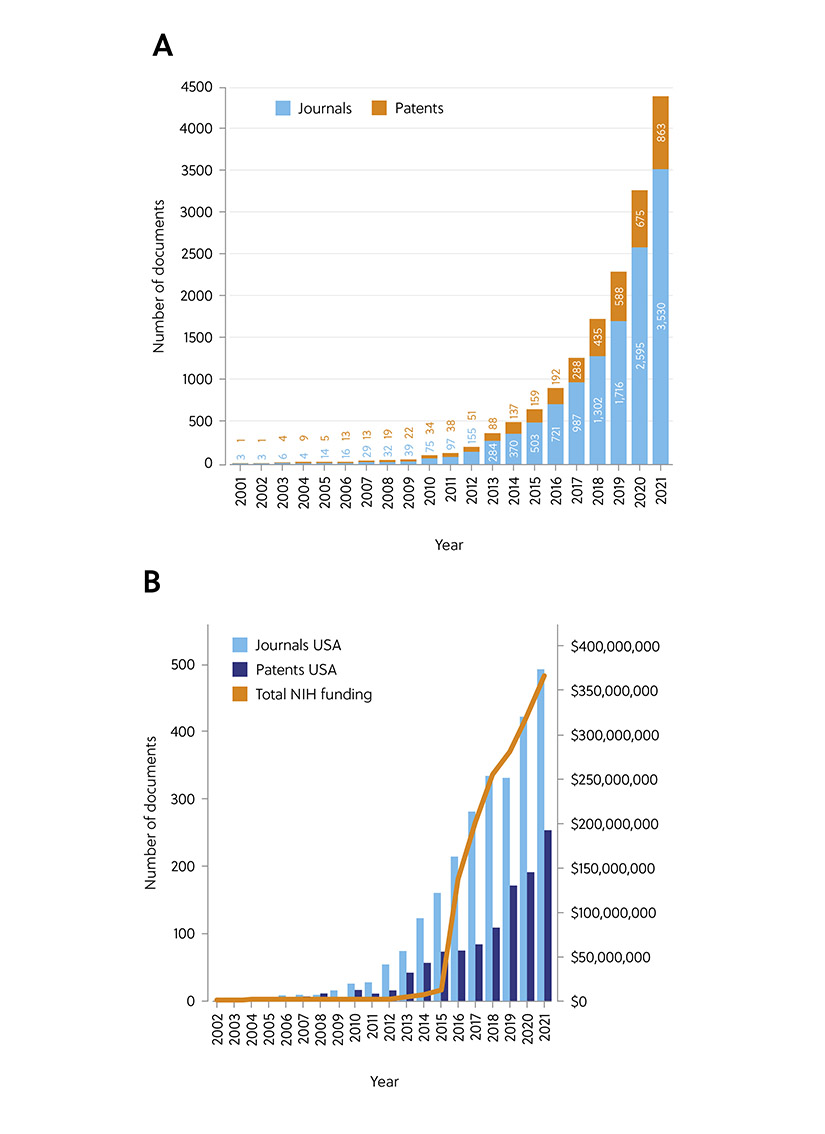 Figure 2. Journal and patent publication trends of exosome research in drug delivery and diagnostics and the association with research funding. (A) Trends in the number of publications related to exosomes in drug delivery and diagnostics, including journal articles and patents. (B) Number of documents originating from organizations in the USA as correlated with the annual NIH funding.

In the last 3–4 years, exosomes have become preferable over lipid nanoparticles (LNPs) as prospective drug carriers and the number of documents, including patents and journal articles, related to exosomes applied in drug delivery has significantly surpassed that of LNPs (Figure 3). 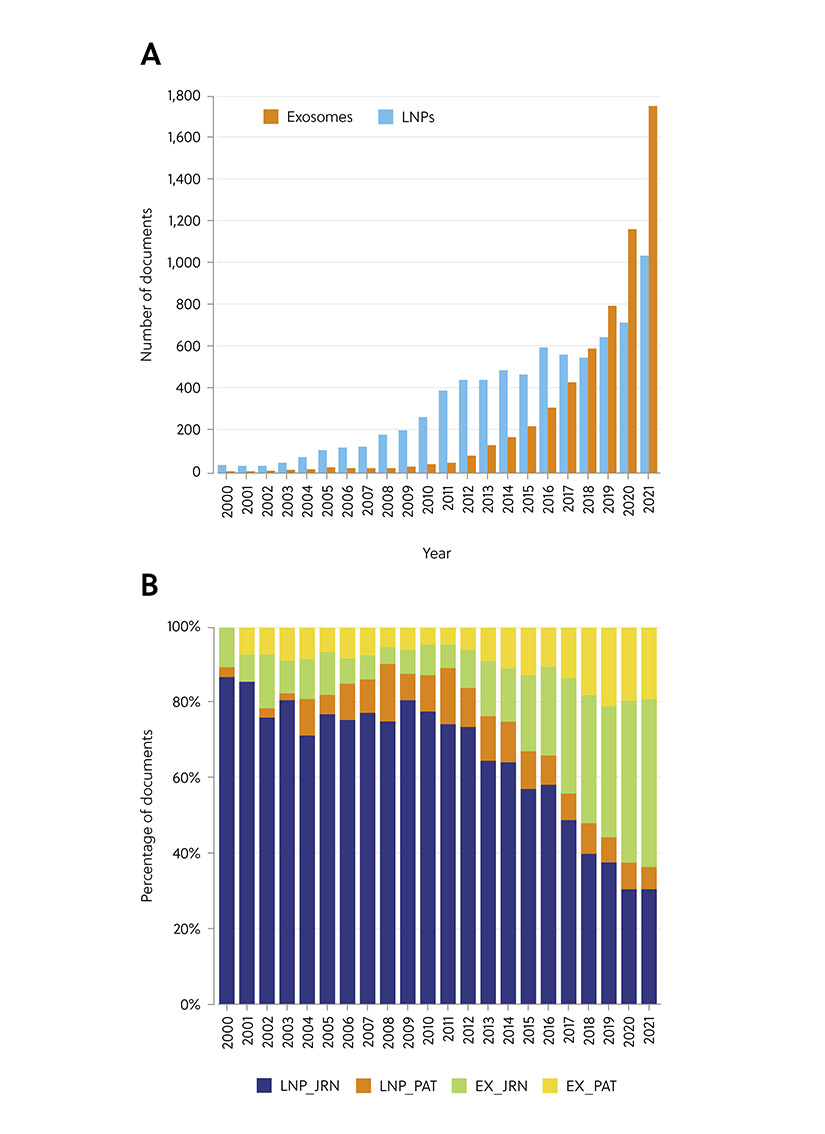 The key players in exosome research

According to the CAS Content Collection, the United States, China, Korea, and Japan are leading the way in exosome research, with the largest numbers of published journal articles and patents related to this topic. Patenting activity related to exosomes is also shared equally between corporate and academic institutions, highlighting the universal recognition of their promise in drug delivery, diagnostics, and beyond. MD Healthcare, Codiak Biosciences, and OncoTherapy Science have the largest number of patents of all companies, while the University of California, the University of Louisville, and Zhejiang University are the leading universities and hospitals (Figure 4). In terms of patent distribution, the World Intellectual Property Organization (WIPO) received the most patent applications, followed by the US and China patent offices, the European Patent Office (EPO), and the Korean and Japanese patent offices.

Figure 4. Top patent assignees from companies (A) and universities and hospitals (B) for patents related to exosome applications in drug delivery and diagnostics.

The promise of exosomes

Due to their unique properties and their role in a wide range of physiological and pathological processes, exosomes have emerged as a rising star in drug delivery and diagnostics. The potential applications of these natural nanocarriers are seemingly limitless, with prospective applications in cosmetics and food also being explored.

In our next blog in the series, we’ll delve deeper into the key therapeutic applications of exosomes in drug delivery and diagnostics with further insights from the CAS Content Collection. In the meantime, you can read more about this topic in our Exosome Insight Report.

Gain new perspectives for faster progress directly to your inbox.

Gain new perspectives for faster progress directly to your inbox.