The Summer Olympics reveal amazing stories of triumph, determination, and athletic feats. While athletes always look for an edge within the rules (from diets to hyperbolic chambers, to cryotherapy), performance- enhancing drugs (PEDs) are a line that should not be crossed. Performance-enhancing drugs are constantly scrutinized, tracked, and tested for by the International Olympic Committee, US Anti-Doping Agency and World Anti-Doping Agency. While the drugs and methodologies have evolved, anabolic-androgenic steroids (AAS) are still key performance enhancers from the Olympics to the Tour De France, Ironman Triathlons, and even more niche sports like CrossFit Games. This blog will provide details on some common performance enhancing drugs and measures to detect these drugs.

What Are Performance-Enhancing Drugs?

A structural understanding of steroids, their metabolites, and testosterone is central to developing analytical protocols for their detection. Testosterone (T) is a naturally produced hormone and the native ligand for the androgen receptor. When this receptor binds to an androgen such as testosterone or a synthetic steroid, it becomes activated, resulting in desirable performance-enhancing effects including increased muscle strength, bone density, and red blood cell production. While stronger muscles and bones are an obvious advantage for an athlete, the increased red blood cell production provides more oxygen to muscles and organs, which fuels energy production and recovery. Testosterone (both synthetic and natural), therefore, is the basis for anabolic steroids.

The differences in structure, substrate activities, and half-life affect the biological profiles of these anabolic-androgenic testosterone derivatives. These differences are the foundation for designing methods to detect these compounds, especially since we all possess testosterone naturally.

How Are Performance-Enhancing Drugs Detected?

For each drug, identifying its major metabolites is the first step in developing a direct urine, blood, or saliva diagnostic test. The human body produces natural (endogenous) testosterone (T) and epitestosterone (E) in a ratio of approximately 0.4-2 (Figure 2A)1. One of the first detection methods simply measured the ratio of testosterone and epitestosterone in urine samples. If the T/E ratio exceeds 4, doping with an exogenous testosterone product is suspected. To confirm the presence of exogenous T, the laboratory can measure the isotope ratio of 13C:12C in T, as laboratory-made T has a slightly lower 13C:12C ratio than endogenous T2. This methodology was used in the prosecution of Floyd Landis surrounding his performance in the 2006 Tour de France, proving that he had, in fact, used exogenous testosterone. 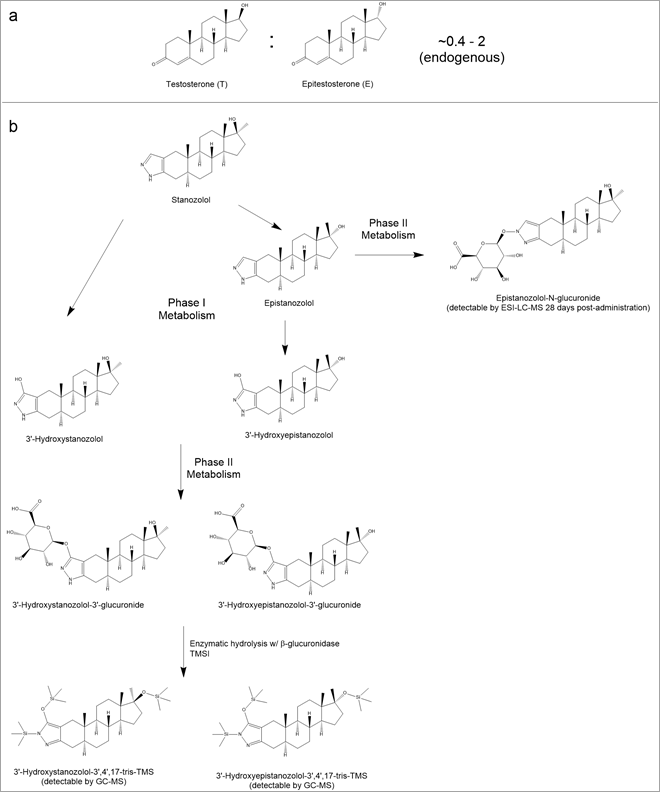 Figure 2. Testing parameters for anabolic-androgenic steroid detection. A: Structures of testosterone (T) and epitestosterone (E), which are produced in a ratio between 0.4-2 in the human body. T/E values above 4 are considered evidence of AAS doping. B: Metabolism and analytical procedures necessary for detection of stanozolol by urinalysis.

When a steroidal drug first finds its way onto the competitive scene, the onus is on regulators to understand its properties and metabolism for its detection and analysis. Such was the case in the 1988 Seoul Olympic Games, when sprinter Ben Johnson set a world record in the 100m dash but was stripped of his gold medal after testing positive for stanozolol. To develop a detection method for this drug, researchers had to understand the metabolism of stanozolol and how it could be detected most sensitively. The major route for stanozolol metabolism is shown in the vertical pathway of Figure 2B, along with the sample treatment required to detect metabolites by the time-tested gas chromatography-mass spectrometry (GC-MS)3. However, stanozolol produces another metabolite in smaller amounts called 17-epi-stanozolol-N-glucuronide, shown in the horizontal pathway of Figure 2B. This metabolite is long-lived and can be detected 28 days after administration! To detect stanozolol from this metabolite, a complex combination of methods involving electrospray ionization (ESI) and liquid chromatography mass spectrometry (LC-MS) was more recently developed. Simply put, these techniques create ions which can be separated and identified by their mass to characterize and identify the metabolites present.

Why Are Performance-Enhancing Drugs a Continual Problem?

While scientists were busy improving techniques to detect the anabolic-androgenic steroids they knew about in the early 2000s, Barry Bonds was busy hitting home runs. Little did the MLB know that behind the scenes, Bonds and other athletes had been using a newly synthesized steroid, tetrahydrogestrinone (THG), designed specifically for potent anabolic effects and with anti-doping testing protocols in mind. Dubbed “The Clear”, THG could not be detected in urine initially because the anti-doping program had no knowledge of its existence or metabolites. During an investigation, a sample of THG was extracted from the residue of a spent syringe and identified, after which an LC-MS/MS method could be easily developed for screening4.

The baseball scandal typifies some of the issues surrounding direct detection of AAS in anti-doping programs. First, the screening process is looking for known metabolites of known substances; a well-equipped organization can therefor feasibly synthesize “designer steroids” that have not yet been seen to avoid detection. Even when a testing protocol is in place, infrequent testing (such as in the MLB, where testing occurs twice per year) can allow steroid use to go undetected; longer periods between tests allow the concentrations of steroid metabolites to decrease below the limits of detection more easily. It is also possible for an athlete to deploy masking agents and diuretics to avoid detection5, which places an additional burden on testing administrations.

Anti-doping agencies were aware of these problems and the continued use of performance enhancing drugs despite their efforts to contain them. As early as the 1990s, research had shown that in the absence of exogenous agents, concentrations and ratios of testosterone, its precursors, and its metabolites remain remarkably stable in an individual’s urine, and anabolic-androgenic steroids have a lasting effect on these otherwise stable values. However, it wasn’t until 2007 that researchers adopted Bayesian inference to formalize the detection of abnormal values in these ratios. These ratios together with a hematological profile constitute an Athlete Biological Passport (ABP). This passport is a powerful benchmarking tool to enhance our ability to detect performance enhancing drugs.

In vitro bioassays are another promising nontargeted approach for detecting androgens. By altering cells with reporter proteins under regulation of androgen response elements, these assays can detect androgen receptor activation regardless of its source6. This makes bioassays useful for detecting androgens in samples of unknown composition, such as in dietary supplements, which have in recent years caused athletes to inadvertently ingest banned substances. The further development of nontargeted bioactivity-based detection methods will likely assist researchers in characterizing emerging androgens, whether they be steroidal in nature or part of the emerging class of selective androgen receptor modulators, which bear no resemblance structurally to testosterone and are not as metabolically understood7 (Figure 3).

Looking toward the Olympic games and beyond, there will no doubt be scandals involving doping by individuals, sometimes at the behest of their organizations. Such is the apparent nature of elite sport. In cases when designer drugs are used to avoid detection, such compounds would not have been clinically tested for safety by their very nature and would therefor pose a risk to athletes’ health. But as sports organizations continue to be creative with the pharmacology they deploy, science will continue to equip anti-doping authorities with the knowledge and analytical capabilities needed to detect performance enhancing drugs. Maximizing these capabilities will serve as a deterrent to minimize doping, promote health in sport, and preserve a semblance of fairness.